I bought this “believe” sign at holiday time a few years back but decided I would plant it in my kitchen permanently right in front of my face as a reminder. It sits right near my kitchen table on the top of a cabinet so I can look up at it everyday, often as needed. It has the power to shift my state of being. It has the power to pull me back to my reality which is OF COURSE I CAN. I CAN DO, BE or HAVE ANYTHING I DESIRE IF I JUST BELIEVE THAT I CAN.

And that is my core belief in this world now.

And it changes everything. 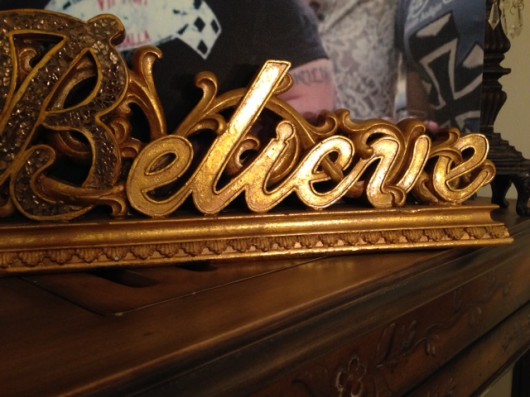 Okay but I am human. And I do lose sight of this sign sometimes. And it happened on May 10. I know the date because it was in fact only a day before my body building competition #2.

Really. The day before. I kid you not. I wasn’t going to do it. No one knows this of course. So SHHH! Please don’t spill my secret fear.  But here is what happened.

Two days before my competition, I told my daughter (who was participating in this competition with me on stage) that I was “not doing” it. I told her I QUIT!

Her reaction? With her scrunched up face and a look to kill, she replied:

“W H A T the heck are you saying Ma? Why are you acting so ridiculously crazy?”

She was on to something, of course.

I was acting crazy.

I was out of faith.

I was creating drama.

I was outside the moment, projecting into to the future.

I had misplaced my “belief”.

I was acting CRAZY.

The truth is I was so out of faith because I was hanging out in fear. The fear of not being “good” enough to get up on that stage and show my half naked 53 year old body. The fear of not being “where I thought I should be” on the scale. The fear of not fitting into my suite…(well just name something, I was afraid of it!). Fear begets more fear. But the fact is that none of it upon actual examination, really made any sense.

Here’s the deal. I had a camera crew of three men coming to film my experience for a video documentary I’d been working on for 23 weeks. They had invested their time with me. They believed in me.

I had invited 40 plus people to come “cheer” me on and support me in the audience. They believed in me.

I had invested 23 weeks of dedication, persistence, hard work. I had pushed thru exhaustion, injury, Christmas Holidays, dates, events, vacations and stuck to the regimented eating and workout plan thru all of it. I had showed up to do all that I could to create this body of my dreams.

My two kids were showing up on stage with me. They worked hard too and they had supported me in my quest to get this butt up there with them. They believed in me.

and in the most loving way, I took my crying, mascara stained, deflated feeling self to the basement. I got out the box. I got the box of paint , my canvas, my brushes and my heart. 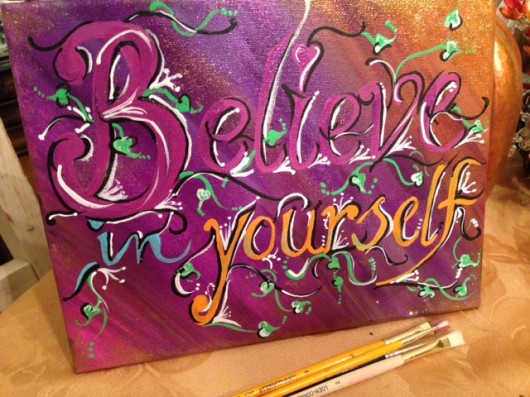 Here is what I created for myself and the sign that pulled me up and out of my fear.

I cried and I painted.

And I cried and I painted.

And I painted and I cried.

And I cried and I painted.

Until the world BELIEVE showed up on the canvas and then I stopped crying.

On May 11, 2013,  I did show up~ at the event ~ on that stage~ as the best version of myself that I could be in that moment. Both physically and emotionally and spiritually.

I showed up for my kids, to show them that anything is possible.

I showed up for my TEAM, to show them that I believed in them.

I showed up for all women over 40 who think that they CAN’T.

And I showed up for ME…

Faith is the opposite of Fear. When fear pops in, the only way out is thru undying faith. You always have the option to choose which side of the coin to look at. Which end of the stick. Which side of the hand. It’s like an on/off button. And you can change it at anytime.

What are you afraid of?
Does it really make sense?

Is what you are afraid of really true?

The real truth is that your infinite possibility lies in your faith. The idea that you can DO WHATEVER IT IS THAT YOU BELIEVE YOU CAN DO…

and yes.. it really is that simple. Pick up your paint brush, your canvas and create for yourself the life you want and the feelings you want to experience.

I believe you can.

I invite you to believe in yourself.

Go ahead and see how different that feels and share below what you discovered.

Psst! Wanna see the trailer to the movie… Strength Beyond Muscle